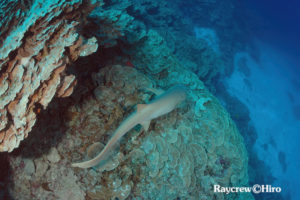 It is known as a particularly quiet shark in the kind of the shark. The tawny nurse shark tends to spend a day on taking a rest under the cave or a coral shelf. At night, it is an active-swimming predator that uses a powerful suction force to extract prey from inside holes and crevices. The diet of this species consists mainly of octopus, though they also take other invertebrates, small bony fishes, and rarely sea snakes. I often see those at a lagoon, ocean side and around channel of the Majuro atoll.

It is a rule of the divers not to touch a submarine life (Underwater critters). Skin divers (Free diver) do not know that rule, so, I see that by movie and photos they often touch this kind of sharks. Not because it is dangerous, I think that you should stop touching it to not stress the sharks. Of course, it is also a danger avoidance. It feels stress, and they will change a base if they become uncomfortable…

Around half of the Tawny nurse shark which I come across in Majuro atoll does not have the second dorsal fin. Since they are numerous, I can guess that it is genetic.